That' "Don't Stop Believin'" Karaoke Mix Will Leave You Shook 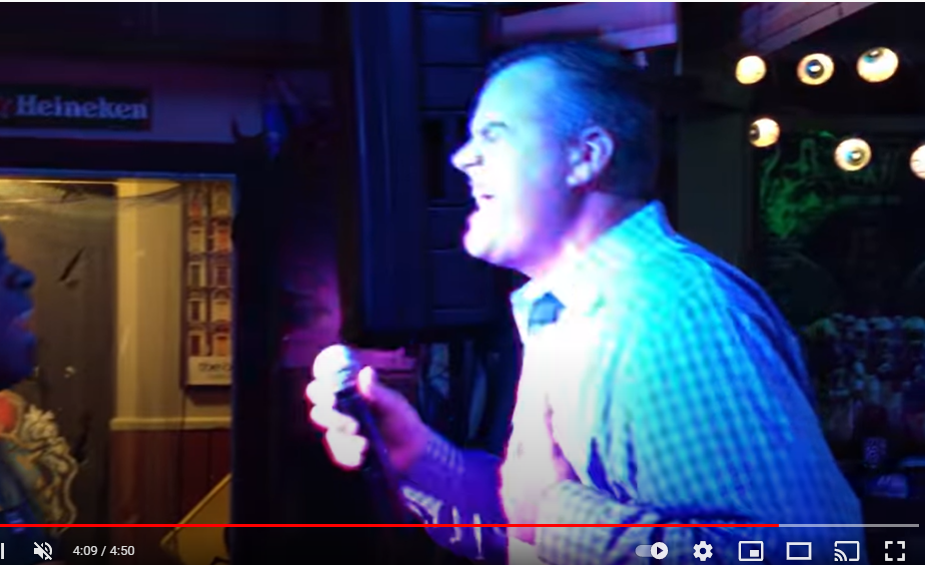 On this week's episode, we talk about something that DJ Baby Van Beezly put out a while ago--a mega-mix medley of a bunch of karaoke singers combined in singing one song--the ubiquitous, omnipresent and (sometimes) annoying "Don't Stop Believin'" by Journey. How ubiquitous? It's currently in second place in the question we finish every quickfire game with: "If you could magically strike one song from every karaoke playlist forever, which song would you choose?" It's the inspiration behind the title of the book episode 14's guest Brian Raftery wrote about karaoke.

We would have featured the actual thing in the episode if we could have, but since actually seeing it is important, we'll include it here:

Obviously, it's really well edited--as Baby Van Beezly mentions in the episode, her husband Will Lemke is a video editing professional (you can find lots of his work at Jazrupt on Youtube. But it really captures the variety of voices you hear at karaoke (ranging from great to... not so great) all in one song. Chances are, you'll see a bit of yourself in the video, whether you're the drunk guy proclaiming it to be "the greatest song of all time," the person who claims to (or never has) "done this before," or one of the people who flubs a line or a note.

What is it about the song that makes it such a karaoke staple? It's not ease of singing--Steve Perry's vocals are hard to match for any voice, even adjusted for range (but it's never quite as good adjusted as it is when someone really belts out those high notes). It's not sheer popularity--while it made Billboard's Top 100, it peaked at #9 on that list back in 1981 (although it ranks very highly in paid digital downloads currently). It's opening keyboard part is iconic, and instantly recognizable, but so is the Who's electric organ opening to "Baba O'Riley," a song just as hard to sing but rarely heard in karaoke bars.

If you ask me, it's a mix of two things: a nostalgia sweet spot and the surface message.

For karaoke in the US, a big breakthrough was Johnny Carson talking about karaoke in 1986 on The Tonight Show, but karaoke was already seeping in. One of the places that claimed to be the first karaoke bar in America, Dimples in Burbank, CA, opened in the spring of 1982. It took technology catching up to people wanting to sing in bars before karaoke got really big in the US--laserdiscs helped, but the CD-G made it so large, quality song selections were more readily available and transportable. You'll note that karaoke really starts making a public impression in the '90s--before Lost in Translation, there was My Best Friend's Wedding, where Cameron Diaz's characters awful singing becomes endearing by the end of her song. And, in the '90s, we were already seeing '80s nostalgia. Some things even seemed more popular in retrospect. If you would have asked me if "Don't Stop Believin'" or Night Ranger's "Sister Christian" ended up higher on the Top 100, I would have given you the wrong answer ("Sister Christian," another karaoke staple, topped out at #5). That's nostalgia for you--it just "feels more right" that Journey's song would have placed higher.

And maybe it's that other reason that leads to that--the surface message of the lyrics. It's full of yearning, and we're all yearning for something. And a lot of us are living just to find emotion somewhere in the night.

So we hold on to that feeling, karaoke singers against the current, borne back ceaselessly into the same catalogue of songs. They're sung differently, sometimes. Sometimes better, sometimes worse. But seeing them all spliced together--it drives home how karaoke can diminish the differences between people who just need to let their song out.