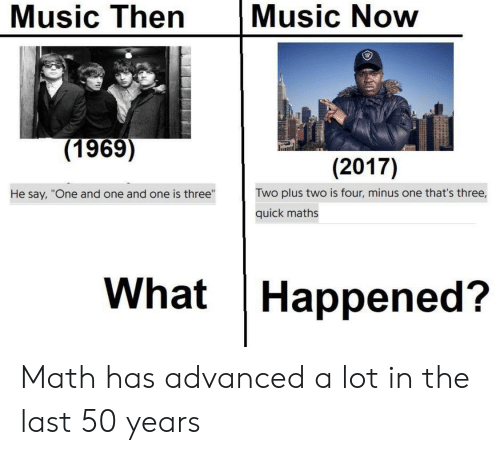 It may not be surprising, if you know me and/or listen to the podcast, that I have often been accused of being a pedant--and it's a fair accusation. If you were a fan of How I Met Your Mother, I'm much more like a... less problematic Barney Stinson than I am any of the other characters.

Except Ted, in a few instances.

In his most egregious, pedantic instances. I felt seen and attacked in equal measure with Ted's pronunciation of "renaissance." Anyone who has ever gone to a ren faire with me has suffered through my diatribes on the letter þ, which became y through expansion of printing presses and the efforts to standardize printing and spelling over time, and how there was never said a "ye olde" anything, but how it should be read as "the olde" and oh god, I've now done it to you, too.

Sometimes, though. Sometimes, pedantry can be handy. It's spectacularly useful when fighting pedantic fire with pedantic fire, which is helpful when dealing with the absolute worst music meme that gets recreated and recycled ad nauseum: 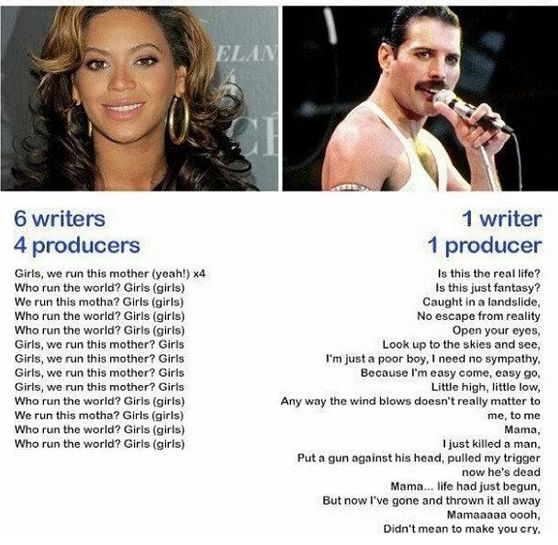 Well, let's address this off the bat--this a poor comparison. Stripping as much subjectivity as possible and not debating the merits of either song, this is very much the parable of the blind men and the elephant--grabbing a part and making an assumption. And that works! Particularly if your goal is to set "Bohemian Rhapsody" as the high art, forgotten brilliance against modern claptrap. But, with Beyoncé, they've grabbed the trunk and declared it a snake--that's the chorus.  More lyrics from "Run the World (Girls"):

It's hot up in here, DJ, don't be scared to run this, run this back
I'm repping for the girls who taking over the world
Help me raise a glass for the college grads
41' Rollie to let you know what time it is, check
You can't hold me (you can't hold me)
I work my nine to five, better cut my check
This goes out to all the women getting it in, you on your grind
To all the men that respect what I do, please accept my shine
Boy, you know you love it
How we smart enough to make these millions
Strong enough to bear the children (children)
Then get back to business
See, you better not play me (me)
Oh, come here, baby
Hope you still like me
F you, pay me

Let's face it--by and large, the folks who share memes like this have some things in common, in my anecdotal experience. They're overwhelmingly white, overwhelmingly male, and overwhelmingly devoted to "when music was music, man" regardless of whether or not they were alive and listening to things in that arbitrary time period.

What of the other stuff in the meme, though? It implies that, today, it takes "6 writers, 4 producers" to make such a simple, banal song (given that the only quoted lyrics were a repetitive chorus). Who all contributed to that, to make up those six writers? Beyoncé Knowles, Terius "The-Dream" Nash, David Taylor, Wesley Pentz, Adidja Palmer, and Nick van de Wall. What it doesn't include, for context, is that "Run the World (Girls)" samples "Pon de Floor" by Major Lazer. And who are the credited writers for "Pon de Floor?"  Thomas Pentz, David Taylor, and Nick van de Wall. Who did the vocals for "Pon de Floor?" Adidja Palmer (also known as Vybz Kartel). So that leaves two--Beyoncé Knowles, and Terius Nash--as credited writers outside of the sample. Now, for Queen--the songwriter is listed as Freddie Mercury. But it's not a stretch to imagine it being a collaborative effort, given the way the band worked on things and the knowledge that Mercury's instrumental prowess was limited to piano and guitar. If we want a fairer comparison--a Queen song with a chorus--we could use "Bicycle Race."

That song was written by Mercury, but had two listed producers: Queen and Roy Thomas Baker.

So, by highlighting the chorus of this song--and putting it up against a song decidedly lacking in a chorus--are they pointing out the lyrical simplicity? Bristling against an anthem for women? Purposefully singling out a Black woman artist? Nah, couldn't be. 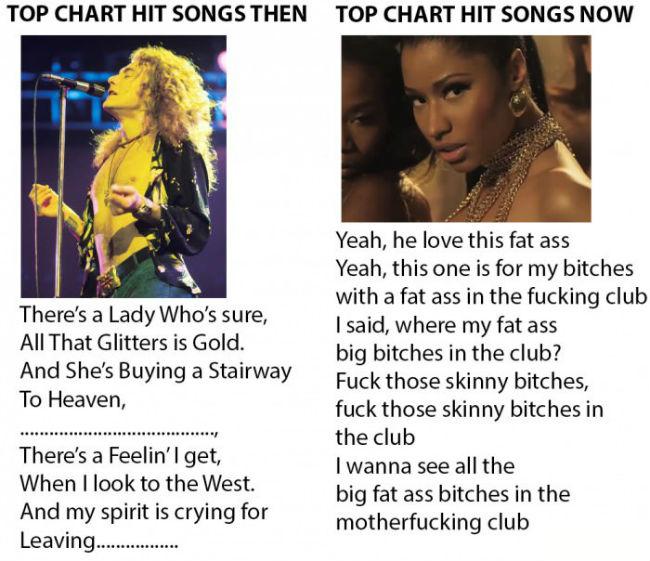 I mean, again--we're having an issue with sample size--one bit from one song compared to one bit from another song. Did Nikki Minaj ever do a song about hobbits? Maybe that would be a more apt example.

T'was in the darkest depths of Mordor, I met a girl so fair.
But Gollum, and the evil one crept up and slipped away with her, her, her....yeah.

What is lyrical complexity, though? Is that what these things are getting at? If that's the case, a lot of the folks making these memes would probably bristle at getting absolutely bodied by the extensive vocabulary in some hip hop acts. Now I'm thinking how I should write something about folks like Big Daddy Kane and Eminem being the heir apparents to the musical songwriters of the thirties and forties because of their use of internal rhyme schemes.

But that's not what it's about. It's about "kids these days" and "music these days" and, man, how much better things were when I was young, man. It was just a better time with better music back then, son. These kids today and their vulgar songs and the--[VICTROLA SCRATCH NOISE]

In olden days, a glimpse of stocking
Was looked on as something shocking.
But now, God knows,
Anything goes.
Good authors too who once knew better words
Now only use four-letter words
Writing prose.
Anything goes.

But, y'know, this is me, showing how much of a fuddy-duddy I am, complaining about how people communicate today versus the halcyon days where things supposedly had nuance and context, and weren't just image files shared on social networks.

At least these ones don't have Minions on them.