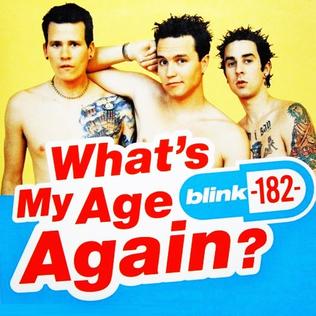 If you're wondering what this is referring to, check out the previous posts in this series:

Before I get into it, can I just say how bothered I was typing "1999" there? That feels too long ago. The distance between that song being released and today is the same distance as "What's My Age Again?" being released is to the Bee Gee's "How Deep Is Your Love."

Realize this--if this song were a car, it would be three years away for qualifying for antique license plates.

I'm sorry for sharing that. I know it's painful. Especially if you, like me, are in your early- to mid-40s, it really doesn't feel so long ago. You absolutely remember hearing this on terrestrial radio or that new, wild satellite radio thing that was making an entry in cars, either as a factory option or as a self-install kit.

One of the things that has kept in our minds is it's surprising, remarkable staying power. Pop punk remains popular with the fans of all the genres that sprang forth from it, so it's not a stretch to see an emo or screamo devotee bopping along to this nearly-classic song. And it's structurally designed to be catchy--the chorus lyrics change, but the rhythm remains the same.

Some of those lyrics are dated--while "Call ID" was already out and available then, we now have apps to screen calls--if we even answer calls at all. And payphones? We might need to explain what those were to younger friends, acquaintances, and relatives. But the themes in it are damn near universal. There's a part of us that's always the who-we-were in our teens and twenties. Most people are nostalgic for something from that time (or from times before them--a theme that will likely come up later in this series), especially when faced with aging, maturing, and the responsibilities and difficulties that go along with that.

No one should take themselves so seriously
With many years ahead to fall in line
Why would you wish that on me?
I never wanna act my age
What's my age again?

The theme pops up everywhere. In the 20th Century, both Bob Dylan and Alphaville had songs called "Forever Young." It continues now, and stretches far back into the past--whether in more recent songs (Frank Turner's "Photosynthesis" comes to mind, with it's "And I won't sit down / and I won't shut up / and most of all, I will not grow up" refrain), or older, hornier poems from the 1600s:

Now let us sport us while we may,
And now, like amorous birds of prey,
Rather at once our time devour
Than languish in his slow-chapped power.
Let us roll all our strength and all
Our sweetness up into one ball,
And tear our pleasures with rough strife
Through the iron gates of life:
Thus, though we cannot make our sun
Stand still, yet we will make him run.
-Andrew Marvell, "To His Coy Mistress"

In addition to that theme, the song itself bounces. I'm not the most devoted pop punk fan, but the thing that it shares with the punk I love--and the some of the music I really love (early rock and roll and rockabilly)--is the driving up-tempo rhythm, guided by Travis Barker's drums. This is not a song you listen to quietly and contemplatively.

How it went: I had fun with this one. It's not one I've done regularly, but I'm pretty sure I've done it before (in a decade and a half of doing karaoke, I've most definitely heard it often). The people in the bar certainly preferred it to my Adele from earlier.

Nearly anyone can perform this song and expect applause. The hardest part was on my knees, as I did do that pop punk bouncing up and down thing while doing it. Your knees don't like you when you're 42.

I'm pretty sure most people would have fun doing the song. You can bop around and dance. It's not difficult or intimidating. A crowd in the 25- to 50-year-old range will know and probably like the song--at the very least, they're familiar with it, which helps with having fun singing it.

You know what? Yeah, absolutely. If you were young when this came out, this song does its job: it's message and mood can help you feel young again. Could you substitute other songs from the genre and era? Probably, but I'd be hard pressed to find a reason why you would want to.

And maybe it hits because I, too, never want to act my age. You may feel the same way.